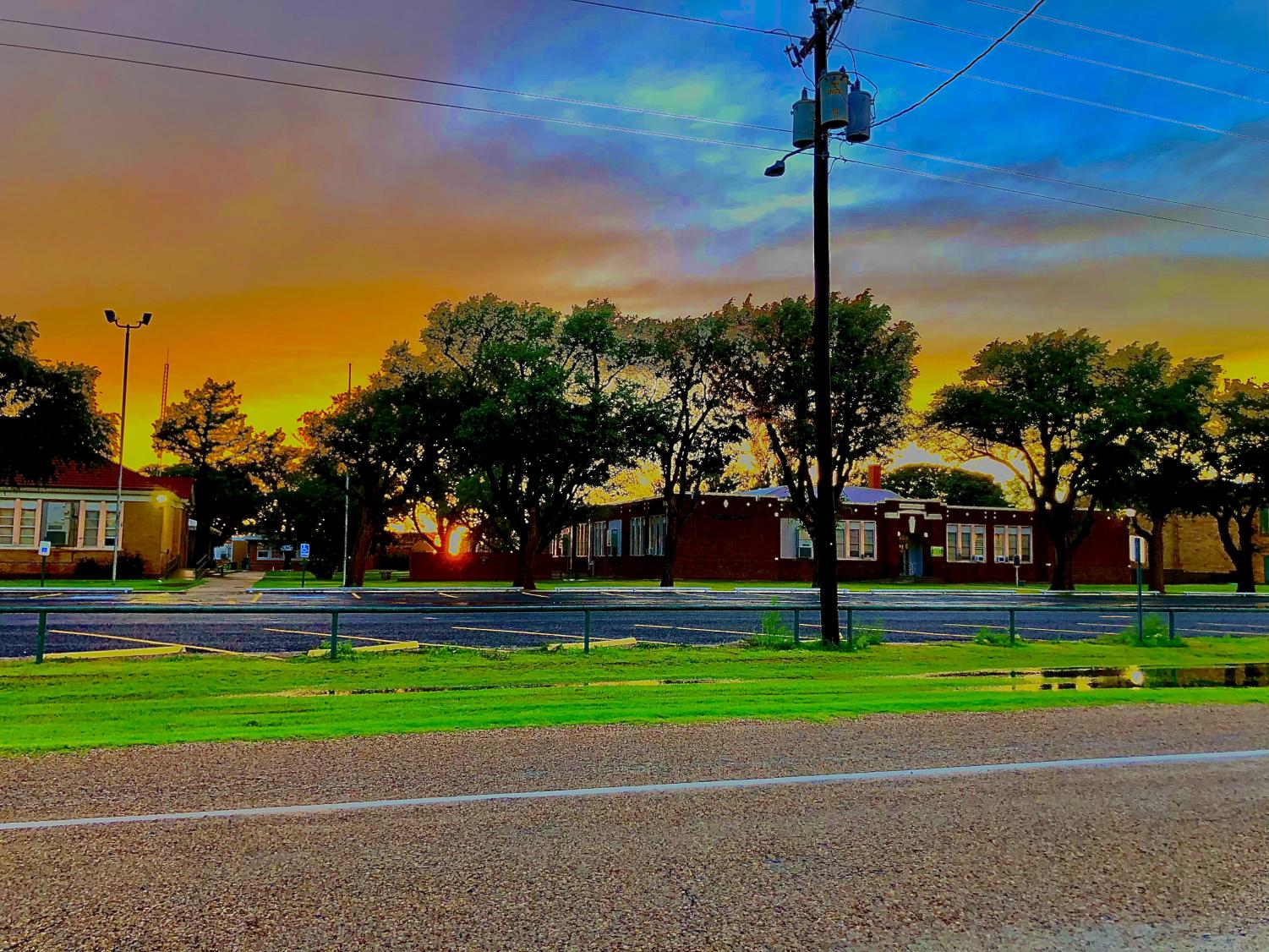 Small School, Large Roots: It’s All About the People

The class of 1967’s motto perfectly describes the wonderful precedent Springlake-Earth ISD has set over the years.

Springlake-Earth High School is rich in heritage and history. A farming community in rural West Texas, the school has proven to be a place focused on Christ, commitment, and citizens that truly shine in the lives of those around them. The land the school and surrounding communities reside on was originally part of the XIT.

“There was a big ranch, the XIT ranch, and it was pretty humongous,” explained freshman Hannah Alvarez.

According to the Texas State Historical Association, the George C. Wright Land Company bought land in 1908 to settle a town from the Halsell Cattle Company, where he built a store, post office, and hotel. A one-room school house was also built, just north of the current Springlake cemetery.

In 1923, the school building was moved to its current central location. An application for the school to become an independent school district was approved, and a bond was passed to build the new school house (the current technology building).

Finally, in 1925 the school was opened. Three years later a football program was established, a band was started, and the school newspaper, The Springlake Siren, published its first paper.

During the next 10 years, the Wolverine was chosen to be the mascot, the first yearbook was printed, and the FFA chapter was established. 1936 saw the construction of the current Junior High Gym and, in 1939, the current Springlake-Earth High School was dedicated.

The 1940s brought interesting ways to cope with stressful situations. For instance, in October, the students would get out for two weeks to help with the cotton harvesting season. Sheila Johnson, first-grade teacher, and SEHS shared another example of this.

“My dad’s senior year the war had started, so he had to drive a school bus because there weren’t enough to drive,” said Johnson.

Despite World War 2 and the harvest, by 1946 the school had a new grade school gym also boasting tremendous football, basketball, and even wrestling programs.

In the 50’s, the elementary gym was converted into a cafeteria, the elementary itself was constructed, along with the high school gym, auditorium, and band hall, and the parking lot in front of the High School was paved.

In 1963, the fieldhouse, track, cafeteria, Ag. shop, bus barn, and the junior high wing of the elementary were all built as part of a bond that had been passed. The press box was added to the stadium the following year, along with the name Earth on the school title.

In 1964 the Earth Chamber of Commerce offered to buy a big, lighted sign to show the location of the school in return for the name “Earth’ being added to the school.

“So, they put a sign out there because we’re in the middle of nowhere,” Alvarez said, “It was a big light up sign, and they had to get permission from the board to put the sign out there”.

Johnson highlighted some differences in the school between now and when the school’s name was changed.

“If you wanted to make a phone call, you were not allowed to use the school phone,” elaborated Johnson.

To talk on the phone, a person would walk outside the high school where there was a phone booth.

She mentioned other differences too, like the number of school buses residing at the school.

Johnson stated “There were eleven buses. Parents did not pick up their kids unless they were going somewhere. Everybody rode the bus home.”

By the 70’s and 80’s several school traditions reached their highest points.

“When I was in school, we had a contest of who could bring in the most poundage of wood,” said Libby Geissler, former student and teacher at SEHS.

Each class chose a girl to represent them at the homecoming bonfire. The winning class’s representative became Miss Flame.

“Homecoming was always a big deal,” related Geissler. “People used to make a point of coming home for homecoming.”

Homecoming was always a big deal. People used to make a point of coming home for homecoming.”

Homecoming has always been a chance to see people not normally seen throughout the year, especially in their honor year. Another longstanding tradition, The Baccalaureate, takes place the Sunday before graduation.

“It has always been a big deal in our community because family members that live off, and need to go to more than one graduation, can make it for Baccalaureate and miss  Graduation,” explained Geissler.

Another tradition took place the Friday before Baccalaureate and Graduation, albeit a little more entertaining.

“We had what we called a play day,” said Geissler. “The first part of the day was what they called senior follies.”

The seniors would put on a variety show: singing songs, performing magic, doing skits, and generally acted silly on stage.

“Then the rest of the day, we’d go outside and play volleyball,” related Geissler.

The high school enjoyed various games of pick-up sports, or just sitting on blankets under trees. The high school was also gifted with the opportunity to wear shorts that day, unlike any other day of the year. The students also did not go on any field trips, except for a day trip to Lubbock, their senior year.

“Your senior year you got to go, and they would take the senior class, and we’d go to Lubbock for the day and go to the show,” said Johnson.

As time went on some traditions were stopped, some lived on, and more evolved into new traditions for the next group of students.

The whole community leaned in to cheering their football boys. The moms of the team organized ways to get the boys snacks, prizes, and support. The parents would make sandwiches, populate huge victory’s lines, and one year during playoffs, several families wrote their player’s number on their roof with Christmas lights. Along with this, every person in the stands held a cowbell painted green and gold to cheer on The Mighty Wolverines.

The buildings on campus also went through several changes, like in 1999 when the junior high students moved to the elementary and the school’s first building became the technology department.

“That was a big move for the school,” said Mark Parish.

The time in between saw the construction of The Veteran’s Wall, largely due to Linda Thompson, and a huge milestone celebration for the school turning 100 years old. Around 2009 a big improvement was made to the school. One most people did not even realize.

Still another shadowed improvement Parish was instrumental in, was adding 10 more years of step-increases in payment for teachers.

It’s about the people: the administrators, the teachers, the parents. The people make the school.”

“We’re a small school, so sometimes you have to be pretty innovative in enticing people and wanting people to come and stay at Springlake,” Parish said.

Before the school board’s actions, older teachers capped out of pay increase at 20 years. The increase in pay was a big incentive for older teachers, who have dedicated their lives to impacting our nation’s future, to stay at Springlake-Earth because being successful is in the people.

“It’s about the people: the administrators, the teachers, the parents,” stated Parish. “The people make the school.”

Parish is not the only one who shares this opinion.

“Working here is not just a job, it is definitely like being part of a family,” said Connie Edwards, current Pre-K teacher.

One year when Edwards was teaching third grade, she broke her leg right before school started. Edwards shared how all of the teachers had stepped up a helped her tremendously, without being asked. Springlake-Earth’s spirit has affected all ages throughout the years.

“You know back in the 2010’s era, we were stacked in football,” explained junior Xavyer Mosqueda.

Mosqueda had three cousins on that football team.

“I idolized those guys,” Mosqueda said.

Mosqueda talked about running through the tunnel with the football team, getting super excited to watch them perform. When the team won, they would sing a song which left young students like Mosqueda astonished. Eventually, other organizations added into the excitement and stupor.

Mosqueda related “Whenever we started to get like a real band foundation, you looked over here and you wanted to be in the band. Everywhere, you know the girls, they looked and wanted to be a cheerleader.”

Springlake-Earth High School has always been a powerhouse, setting tall goals and reaching them with ease. The school has a rich heritage that has evolved throughout the years and has stood the test of time. Looking at our successful yesterday, our astonishing dreams today, one can guess how amazing tomorrow’s reality will be.

This story is written with special thanks to Jeanie Furr, Joyce Bills, Connie Edwards, Shelia Johnson, Mark Parish, Libby Geissler, and Jeri Been Goodman for sharing our history and telling tales of the past.

Positive comments only will be allowed.
All Spirit of the Green & Gold Picks Reader Picks Sort: Newest