The Wolverines Fall Short to Rankin 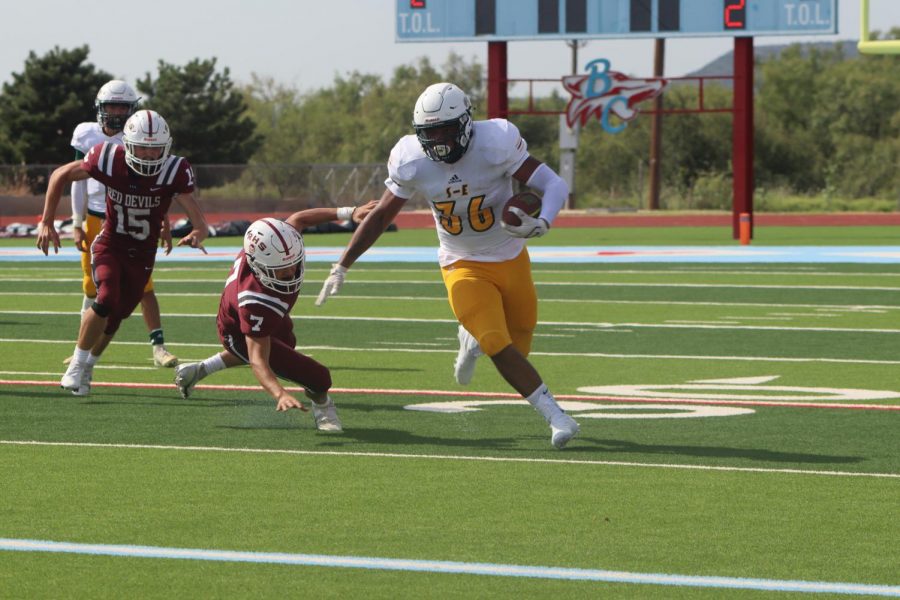 Senior Keshan Holmes looks up the field to score

The Wolverines traveled to Borden County Friday to play Rankin Red Devils who are ranked 3rd in the state.   Even though the Wolverines were picked to get 45’ed, they only lost by 16. The final score was 46-30.

The Red Devils managed to keep the Wolverines at 0 points until the second quarter.  Senior Trace Goodman caught a 25 yard pass from junior Braxton Ethridge to score the Wolverines their first points of the game.

“Trace is the wide receiver I trust the most so that is why I throw it to him,” Braxton Ethridge said.

Reflecting back on the game, Wolverine players recognized their strengths and areas to improve.

“As the game went on we caused a lot of turnovers on offense, “Keshan Holmes said. “We beat ourselves. Overall, I think we are definitely the better team.”

On defense, Roel Fuentes had a great game.

“My mom yelling my name is what gets me fired up and allows me to keep going on defense,” Fuentes said.

Fuentes also added that as a team, he thinks they can improve on less turnovers.

“Offensively, we are still experimenting and trying to find our identity, ” Head football coach Israel Deleon said.  “We had 7 or 8 turnovers; definitely need to fix that.”

The Wolverines still have things to improve on, but when they get those improvements down they are going to be a hard team to stop.

“We showed them that we can play with the very best teams in the state,” Superintendent Dr. Denver Crum said. “I believe we have a team capable of winning a state championship.”