The FFA At District 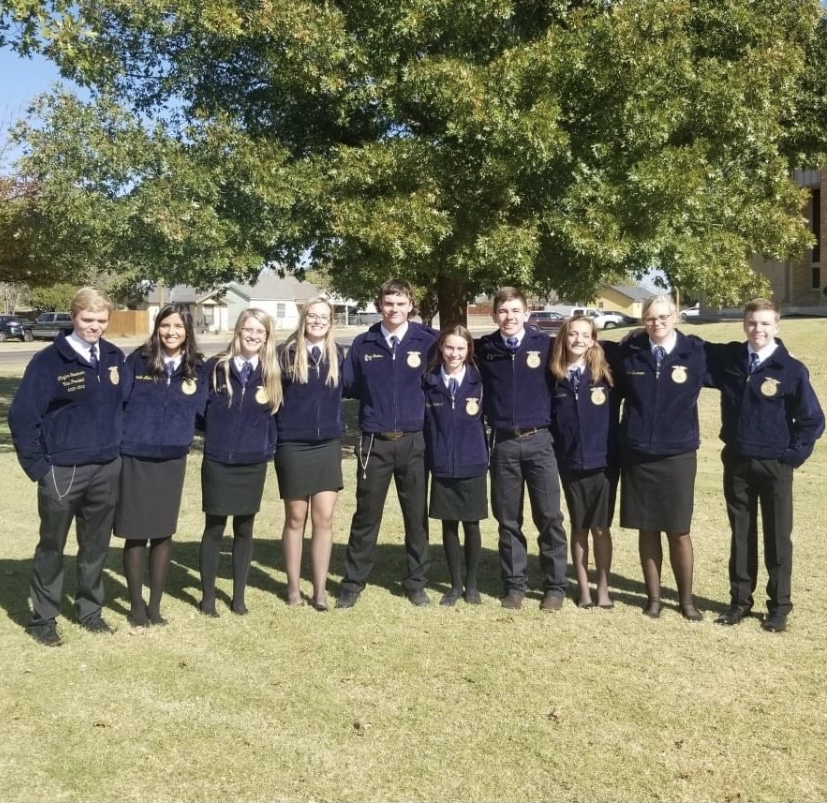 FFA, also known as Future Farmers of America, is made up of multiple aspects. One of those being Leadership Development Events. The Springlake-Earth FFA competed in these events at the Plainview District Contest on Tuesday and represented chapter exceptionally well.

“I participated in senior quiz and chapter conducting,” Jones said. “I serve as the secretary, which is stationed by the ear of corn.”

Senior quiz is composed of many questions, ranging from Farm Facts and Parlimentary Procedure to Leadership Guide questions.

“Quiz is 75 multiple choice questions about FFA,” Jones said. “There is also a true/false section, and it is pretty tough.”

Alvarez talks about her favorite line in the FFA Creed.

“My favorite line in the creed is, I believe in the leadership from ourselves and respect from others,” Alvarez said. “To me it means almost to get respect you have to give it, and that’s really big right now, a lot of people don’t want to earn it, and just want respect given to them.”

She was also the only eighth grader from our school that went to compete.

“Being the only eighth grader was a little scary, but as the day went on it wasn’t so scary because if I needed help on anything they’ve done it before and were there to help me and answer my questions,” Alvarez said. “I definitely look up to the upper-class men and being on the bus listening to them practice the opening ceremonies was cool.”

Opening ceremonies is the way the FFA Members start the meeting. Each officer has something specific to say.

“I have a short part in opening ceremonies, luckily,” Jones said. “My duty is to keep accurate records of all meetings and correspond with other secretaries.”

Jones understands the importance of each stationed officer.

“Opening ceremonies is cool to me,” Jones said. “I like doing it, especially when we get each part word for word.”

Although she like this competition, she still gets nervous before going into the contest.

“I was nervous going into chapter conducting, we’ve only had two practices,” Jones said. “We don’t know what we are about to have to do, and we can’t talk to each other, so it becomes nerve-racking.”

After placing first and reading the judges critiques, the team realized what they have to do to succeed at area.

“I think we need to practice more, and study our questions,” Jones said. “But when we get it good we will be good to go and I am excited to see how we compete at area.”

Mother and teacher Sarah Weldon has faith that senior chapter conducting team will do well at area.

“Altough they struggled to find time to practice, with a little more work and desire they can continue to do well,” Weldon said. “I’m proud of the team and individuals that competed.”