Intended for Love, Full of Hate 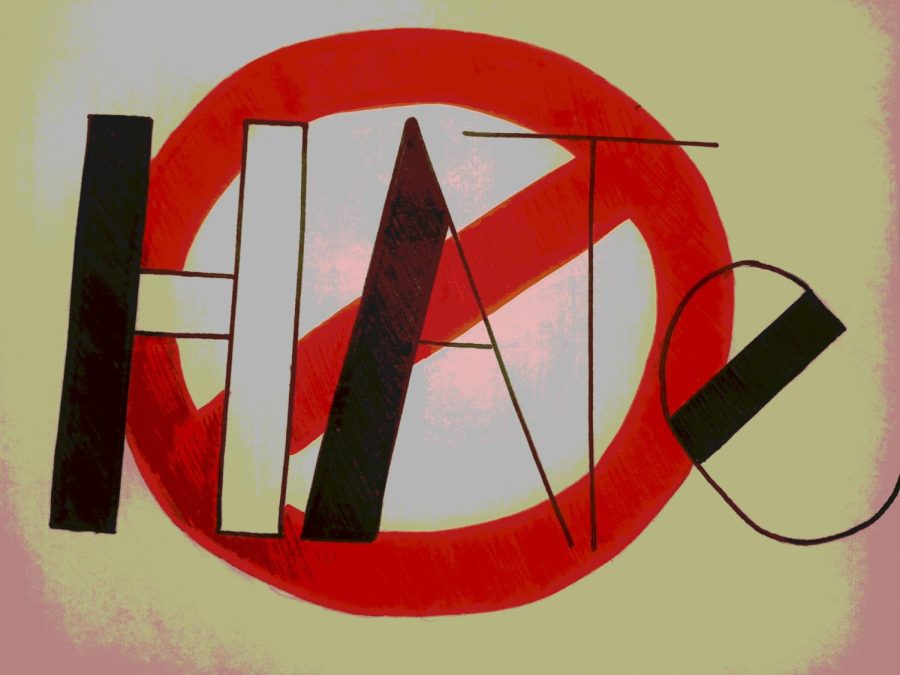 A student-made image that supports the message of this story.

The actions in which people take every minute of every day have an effect that will last a lifetime. Everything in which individuals choose to do impacts everyone and everything around them. Sometimes, someone might expect their actions to have a certain effect on people. However, no one truly knows how someone might react to the actions of others. Especially in the world today where everything has the potential to be taken offensively, people must pay close attention to what they post on social media or what they say to a person. More so, people should be aware of all the negative and positive impacts their actions and their words have on others.

God first created the land without the weeds and thorns growing and causing a nuisance across the land in which he made for his people. He created one man, Adam, and one woman, Eve, to bring human life into this glorious new world. However, evil and disobedience led Eve to eat the forbidden fruit and tempt Adam as well, and sin then entered the world, bringing evil and hate along. As punishment, both Adam and Eve were forbidden from the Garden of Eden, and the rest of humanity would have to pay for their sin. As seen by Adam and Eve’s actions, people more than ever can see how their actions can lead to both negative and positive effects on people across the globe. Even ones no one expected to be affected.

The world, especially at the present time, could not be more divided. A world of people that were once united and at peace has now turned their backs on the very people in which they rely on. People depend on others including their families, friends, teammates, and colleagues. One must lean on those closest to them and those that may be strangers in times of need. When someone needs help finding hope and finding their happiness, they call upon those that are closest to them to help them up off the ground and guide them towards a more joyous path. When one is in desperate need of a hug, they look towards the people that surround them. When someone goes to the grocery store, they depend on the store employees to stock the shelves and provide assistance if needed. When a person’s car breaks down, they heavily rely on the tow truck company to come rescue them from the side of the road. When people need something, they always call upon others to help them, yet the very hands that help are callused because of the mistreatment they face.

People are choosing to harm the ones that surround them and in turn, choosing hate over love. Hate fuels the hearts of so many individuals, and their actions demonstrate the hate in which they carry. Individuals willingly choose to make impudent posts on social media, say discouraging and unkind thoughts about others, and spread rumors and ill-mannered concepts that cause other individuals to feel less of a human being. No one should ever have to feel bullied, targeted, or depressed over the things that other people choose to do. No matter if something was intended to be taken another way, everything that is said or done affects people in ways someone never expected.

No one ever knows how a person is going to react to a situation because everyone is unique and each individual’s emotions are different. In spite of this, people choose to be blind to others’ feelings and well-being. They choose to put down others, and even when they see it is causing harm, they continue to be hateful and unkind. However, people still expect others to be there for them when they are in need of support. It is unfair, and it has led the world to a very unfavorable place. It is filled with nothing but hate, and it is creating issues for everyone, not just the people being mistreated. Jesus wanted individuals to love people, but love for people has been lost.

Only rarely are people blessed with the hope of faith and humanity being restored into individuals. However, when it does happen, it causes a worldwide heartthrob. Despite the things said in person and over social media primarily being harmful and hurtful to others, there are some instances where kind gestures are shared with the world. Even the smallest of gestures count such as holding the door for someone, giving a stranger a compliment, or paying for someone else’s groceries. Bigger gestures include donating a large sum of money to a charity organization, spending the day with elderly individuals in nursing homes, and gifting toys to children in hospitals. All of these tokens of kindness make a person’s day and inspire those who witness such kindness. When an individual is treated so nicely, they aspire to do the same and be kind to someone else, and then that someone shows an act of kindness for another individual. It begins a beautiful chain reaction, and love is spread all around. Others seem to lose the true meaning of loving each other and treating each other with kindness. People should want to do so out of the kindness of their heart, not to receive any reward or be praised for the good deed they have done. They shouldn’t expect to receive love back; they should just show an unconditional and constant love for everyone a person crosses paths with. As said in Luke 6.35, “But love your enemies, do good to them, and lend to them without expecting to get anything back.” God wants his people, his creations, to love each other, and treat one another with respect and warmth because, at the end of the day, each other is all people truly have. They don’t have their phone or their cool, new car. They just have the people around them, so while we are here on this beautiful Earth that God has created for us, people should use their life’s time to treat everyone with respect and absolute kindness.

When God created Adam and Eve and the land in which we walk every day, he had one thought in mind: making a place for love to flourish among his creations. However, when Satan entered the Garden of Eden, and Eve decided to eat the forbidden fruit, evil entered the world through the entrance of sin. Love would forever be challenged, and people’s actions would always be categorized as right or wrong, as an act of love or an act of hate. No matter the action of others, it is always tied back to one thing–God, for he is the creator, and he has the final decision to forgive people of their sins. However, people must determine their own fate by simply treating others with the kindness this world is in desperate need of.