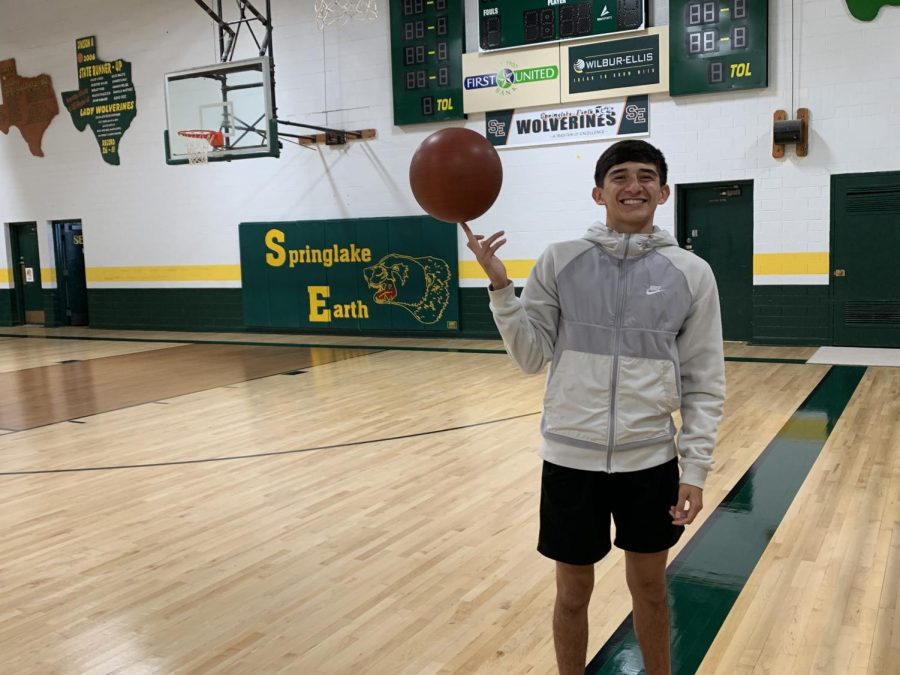 “I’m ready to see what life has in store for me,” Senior Evan Deleon said.

Evan, son of Sonia and Israel Deleon, has lived in Earth since he was in the 5th grade. He also has 1 brother, and 3 sisters. Evan wants to make his family proud, and he is excited to see what his future has in store. He has decided to follow in his dad’s footsteps and become a high school coach. Due to his love for the sport, Evan plans to play basketball at a junior college. Later, he wants to transfer to a larger sized college where he will obtain his degree in education and become a high school basketball coach with hopes of one day coaching on the college level. Evan has always known he wanted to be a coach, and his dad is one that has truly inspired him to become one.

“Since I can remember, my dad has been a coach. I’ve always been around him and the players,” Evan said. “That’s when I realized I wanted to be a coach too.”

One day, Evan hopes to be coaching right alongside his dad. Besides Coach Deleon, Coach CJ Castillo has also had the honor and privilege of watching Evan grow up and become the person he is today, as Coach Castillo has been coaching Evan for almost six years now.

“I met Evan when he was 5th grade. I took him as one as my own. Basketball was a common between us. And he has worked hard for everything he has earned,” Coach Castillo said. “But it’s truly a happy sad moment. It’s hard to find kids like him with his kind of drive and personality.  I’ll truly miss him, but at the same time I’m ready to see him reach his goals.”

Stepping out onto the court and having the control of the game in his hands is a feeling Evan has fallen in love with since the 7th grade when he first was able to play basketball for the school. Every year since, his passion and love for the game has only grown.

“I didn’t know I’d love basketball this much,” Evan said. “There’s just something about it that I really really enjoy.”

Besides basketball, Evan is quarterback for the Varsity team. He has also been a member of STUCO/TAFE all four years of high school, which has taught him so much especially when it comes to education, and has prepared him for the years to come.

“Ten years from now, there’s no telling where I’ll be,” Evan said. “Surely I’ll be done with college, so hopefully I’ll be at a high school somewhere in Texas coaching and teaching.”

No matter where Evan ends up, Coach Castillo will still be here rooting for him.

“I have had the privilege of working with an all around student athlete. I’m looking forward to achieving goals together this year for his last year,” Coach Castillo said. “I’m excited for him and what the future brings.  He’s someone to watch this year for his breakout year.”

Evan gives everything he has and is willing to put in the hard work to be the very best that he can be.

“He continues to use doubt as fuel to accomplish his goals. That’s a great mindset to achieve his goals,” Coach Castillo said. “I encourage him to be himself and continue his hard work ethic.”

To Evan, not letting anything step in between him and his goals is just what he needs to be successful.

“I feel like I have determination and motivation to get the things I want in life,” Evan said, “Those two qualities will help me achieve my goals.”