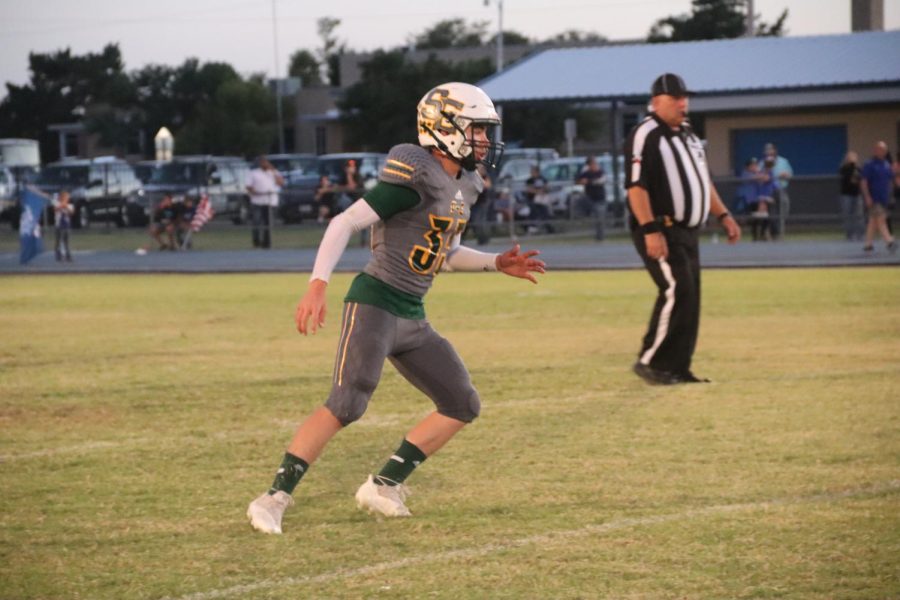 Texas 1A Fan, a popular six-man photographer, was at the game and they give out helmet stickers to players who caught their eye. The sticker is given to one player from each team who exhibits a great attitude, effort, and leadership. Senior Davey Crandall was one of the players who earned a Week 5 Helmet sticker.

“Even though I hate saying ‘As you can tell from the scoreboard’, but as you could tell, we did really good,” Crandall said. “We shut them out.”

Crandall played hard in the game against the Bucks, which helped him earn a sticker for his helmet.

“Personally, I played well I think,” Crandall said. “And I definitely think my teammates played well, too.”

Even though the game was 2 hours away, there were still spectators who made the drive and recognized the Wolverines hard work.

“I can see that the offense is coming together,” fan and coach’s wife MaryAnn Castillo said. “They are getting that team chemistry.”

Senior Trace Goodman also has high hopes for his last season as well as for his team.

“I’m really looking forward to my last football season,” Goodman said. “We have some really big goals set, and beating White Deer was one of them.”

Things are headed in the right direction for this year’s Wolverine Football Team.

“I’m really proud of our team, and what we’ve done so far,” Crandall said. “And I can’t wait to see where it goes.”